About Norman and Sherri Pool 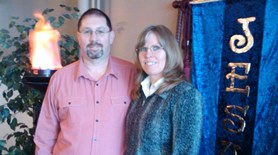 In January 2014, Norman and Sherri joined a team of other believer to be part of a new Church plant. This brand new Church is called Kingdom Embassy Worship Center, and it currently holds its services at Fridley High School Auditorium at Fridley, Minnesota.

Norman and Sherri recently have been more active in ministry outside the four walls of a church. In 2014 they were part of a weekly inter city mission outreach that took place every Friday in the Frogtown/Godtown neighborhood of St. Paul Minnesota. Click here for more information.

Here are some past local ministries that Norman and Sherri were part of.  Prior to being part of a new church plant they both served faithfully at Freedom Church in Ramsey, Minnesota from May 2010 to June 2013.  They served as various roles while on the leadership team.

Prior to this Norman and Sherri served faithfully for 11 years at Shiloh/City On The Hill from May 1999 to May 2010.  As a side note, Norman and Sherri seen the doors of City on the Hill close for the final time in late 2013.  Prior to be part of City On The Hill, Norman was an Associate Pastor at Vineland Christian Missionary Alliance Church at Mille Lacs Lake Indian Reservation from September 1997 to February 1999.  Norman ministered in the prisons in Kansas City, Kansas from December 1991 to July 1997 at which time he moved back to Minnesota.  Norman is a former Gulf War vet. He served in the U.S. Army from February 1985 till he was discharged in December 1992.

Sherri completed the Prophetic School "Prophetic People Arise" with Prophetess Donna Midkiff of Feast of Tabernacles Ministries International.  From October 2007 to August 2013, Sherri  ministered with (MEC) Missionary Evangelism to Corrections to the youth at Lino Lakes Correctional Facility.  Sherri is a true intercessory prayer warrior.  Sherri along with her husband Norman were ordained on 2 February 2013 by Tom Stamman and other fellow ministers of Impact Ministries International.

Norman and Sherri were married on 12 December 1998.  They have a heart to see people restored, set free, and living for the Lord, as well as a heart for the land of Israel, the Jewish people, and for all nations, tribes, people.

If you would like for Norman and Sherri to teach and preach the uncompromised word of Yahuah with signs following in your church or organization click here.

Sometime during the summer of 1995, Yahuah put into Norman’s heart a love for the Jewish people.  This took place in Kansas City, Kansas after Norman would come home from work early and turned on the television.  As he channeled surfed, he came upon a television show called Jewish Jewels with Neil and Jamie Nash.  It was at this moment in time that the love and calling to the Jews would be imparted into Norman.
Four years later, Norman and his wife Sherri were at a meeting led by Apostle Peter Michael Martinez on 26 March 1999 at New Kingdom Ministries International Headquarters located at South Saint Paul.  While in the meeting, Yahuah was meeting the people and Yahuah spoke to Norman where He gave him the name of the ministry to him.  The name of the ministry was to be called “Light Bearer Ministries International.”  Yahuah then spoke that as Yahuchanan (John) bear witness to the Light, so shall you bear witness to the Light to the Jews.
Scripture reference is John 1:6-8
6  There was a man sent from Elohim, whose name was Yahuchanan.
7  The same came for a witness, to bear witness of the Light, that all men through him might believe.
8  He was not that Light, but was sent to bear witness of that Light.
Norman along with his wife Sherri was called to bear witness of the Light to the Jews of who their Messiah was and that is Yahusha.  So the name Light Bearer Ministries International was born.
On 20 June 1999, Prophetess Donna Mae Midkiff, at Shiloh Tabernacle Church, located at Stacy, Minnesota, would prophecy over Norman.  Donna would prophecy that Norman was to be an Evangelist to the Jews.  This confirmed to Norman his calling to the Jews from the summer of 1995.
With the above information would provide the making of the logo.  The lion represents the tribe of Judah, the Jewish people.  The torch represents light.  The sword represents truth.  The color blue which is the color for the shield has the following meaning:
Blue:  Symbolizes the heavenly realm; prayer; priesthood; authority; revealed God; grace; divinity; Holy Spirit; overcomer; revelation knowledge; the Truth; the Word of God; the Word; Messiah. - Biblical Color Meaning In The Bible

We are always in Touch